Bigsby was an angry man that lived alone.  It seemed to him that he had always been alone.  Even when he knew his parents early in life they were never around and payed little attention to him.  This resulted in Bigsby becoming a very lonely and angry person.

When Bigsby was a boy others had more toys.  When 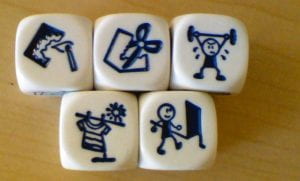 he was a teenager he couldn’t afford the cars that everyone else had.  When he was a man he wasn’t able to land a good job and now all his neighbours had nicer houses, bigger houses, and nicer…everything.

Bigsby had had enough and one day he tried to be nice to his nmeighbiour to try and make a friend.  But his neighbor said he didn’t have time because he was getting his brand new SUV detailed at the Chamois car wash to prepare for his big date with the girl from the news channel.

Bigsby had heard enough.  He decided to burn down his neighbour’s house as an ultimate act of revenge on the world for all that everyone had that he did not.  But it did not go as planned.

Bigsby lit the fire, danced around happily, watching it burn, but then he started to feel remorse.  What was he doing?  How was this supposed to make things better.  How had things gotten so bad?

That was when Bigsby noticed the wind was picking up and blowing flames toward his own laundry hanging in the yard.  The wind blew out the fire on his neighbou’s house and soon fate decided that what ‘goes around, comes around’.  Bigsby found himself with a neighbor that still had a beautiful house, and himself without a single set of clothes except for those on his back.

When his neighbor returned he cancelled his date to help Bigsby.  He gave him two new suits from his ouwn closet and offered to take him shopping for more.

Bigsby declined the offer.  The next day he decided to sign up for sewing classes and learned to make his own clothes.  He loved them!

Then Bigsby decided to make new clothes for all his neighbours.  They loved them too.  His neighbor with the SUV wore them on his date with the girl from the news.  She loved them so much she told her designer friend in L.A.

Bigsby found himself with a new business, new talents, new people to be around, and a whole new life.  It turns out, at least for Bigsby, that helping people got him more than being spiteful.

written with story dice.  Get some for yourself.